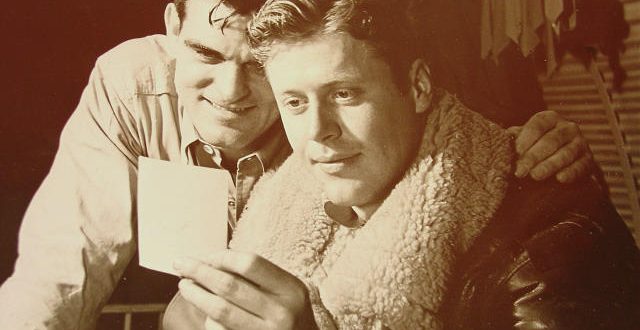 A Matter of Seconds

The target for June 6, 1944 was a road junction at Caen, France. The B-26 “Marauders” of the 323rd Bomb Group were on their way to Normandy. The plan called for bombing from 12,000 feet, but poor weather caused the Marauders to come down lower: much lower.

“…as we came over the French coast we were shot at by 40mm guns. The gun fire lasted about 1 minute and as we came out of it, I called each crew member and asked if they were all right. In each case they were, although the plane had been hit in the left wing. A matter of seconds we ran into more flak. We were hit in the nose, wings, and bomb bay. The plane caught on fire in the bomb bay. The pilot said ‘Bail out.’ Sgt. R. Findley, the cameraman was the first one to leave, I (sic) the tail gunner was next and J. Wesran was third and last. While I was still in the air in my chute the plane hit the ground. No one else but the three of us got out.”

After the War, the aerial gunner of the crew, Staff Sergeant John L. Westran, was interviewed about the crash. In a report from September of 1945, he was reported to have stated that “…substantiated by the physical facts that (SSGT Westran) was the last man out of the plane and shortly thereafter saw the terrific explosion when the plane hit the ground. There was only a short interval between the time Sgt Westran bailed out and the bomber hit the ground and exploded.”