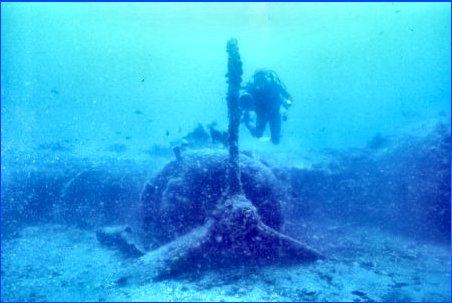 Two crews from the 449th Bomb Group were lost 13 months apart; one in January of 1944; the other in February of 1945. Both went down off the coast of Northern Italy. And though their wartime missions were very different, in the end, their stories are the same.

“Dumbo,” B-24 tail #41-29217, was piloted by 2nd Lieutenant Ben Newman Kendall, 23, born in Abilene, Texas, on December 14, 1919. He was the son of Owen W. Kendall, a veteran of World War 1, and Sarah J. Kendall. Lieutenant Kendall entered the Air Corps from Las Animas County, in southern Colorado, part of the dry high plains country bordering northern New Mexico. Kendall was an experienced flyer for one so young, and was one of the original cadre of pilots belonging to his squadron, the 718th.

The Luftwaffe airfield at Udine, in Northern Italy, was Kendall-and-crew’s target on January 30, 1944. While over the target, at about 12:30, they were jumped by the Luftwaffe, flying both Me 109 and Fw-190 fighters.

Two other flyers from the 718th reported what happened next:

“. . . As I looked down I could see the right wing on Lt. Kendall’s ship ablaze. I also saw two enemy fighters diving on him and firing as they came. The ship went out of formation into a long downward glide. I did not see anyone bail out.” –Staff Sergeant John E. Nash

“. . . The right wing was in flames and the ship was in a long downward glide with two ME 109s on her tail firing into her . . . . the ship was badly crippled and a crash was inevitable.” –Staff Sergeant Joseph F. Clark

No American military witnesses could pinpoint where exactly the B-24 went down, but the remains of Lieutenant Kendall and his copilot, 1st Lieutenant Fletcher S. Porter, were found by German personnel near the small village of Sanmardenchia, and buried nearby in the civilian cemetery at Grado. After the war, Lieutenant Kendall was buried in the Florence American Military Cemetery at Via Cassia, Italy, while the family of Lieutenant Porter opted to have his remains returned home. Lieutenant Porter was buried at the Georgetown Cemetery in Georgetown, Kentucky, in 1950.

Remarkably, the flight engineer of the crew, Staff Sergeant Harvey Gann, survived the crash, and escaped from his POW camp on his fourth attempt. In his book about the events of January 30, 1944, Escape I Must (Woodburner Pr, 1995), it was revealed that “Dumbo” crashed on the little island of Morgo, in the shallow lagoon off Grado, Italy. It was from this location that the remains of 2nd Lieutenant Harry B. McGuire, of Randolph County, IL, were recently recovered. The wreckage is believed to still lie in in about 10 feet of mud on Morgo, but has not been fully investigated by American military authorities, despite ongoing efforts by families of the crew.

The rest of the crew are still considered missing. The full crew included:

Thirteen months later, on February 28, 1945, with the end of the war in Europe only weeks away, B-24 tail #42-51642 headed down the runway for a mission to Northern Italy. Their target was the Isarco-Albes Railroad bridge, a conduit for German forces being rushed to battle to the south.

One of the gunners of this crew was Staff Sergeant Albert Acampora, of New Haven, Connecticut. He was the son of Anthony and Fortunado Acampora, and had been in the Air Corps since March 31, 1943. He served his Basic Training at Fort Leonard Wood, Missouri, qualifying as a rifleman. From there, he volunteered for flight duty, and was sent to Amarillo, Texas, then to Lowery Field, Colorado, then Tyndall Field, Florida, and finally Westover Field, Massachusetts, prior to being sent overseas. He was 23 years old on the date of his final mission.

The crew to which Sergeant Acampora belonged was piloted by 1st Lieutenant Howard Hanson, of Stoughton, Wisconsin. The entire crew were:

After being hit by enemy aircraft fire, the plane struggled to keep up with the rest of the formation. There were no survivors from the crew, but one witness, 2nd Lieutenant Harold Hultquist, of Walthill, Nebraska, saw the bomber “. . . skimming the mountain tops. Two engines were out . . . .” No one knew for certain where the doomed bomber went down.

It took years of investigation after the war to learn more about the doomed B-24. On July 6, 1949, Major General Edward F. Whitsell, of the Adjutant General’s office, penned a letter to Sergeant Acampora’s parents.

“When over the target, the aircraft was seriously damaged by enemy antiaircraft action and, although it kept pace with the other planes in the formation when rallying from the bomb run, it was seen to lose altitude and veer to the right, toward the Adriatic Sea. Subsequently, the bodies of three of the members of this crew (Betz, German, and Turpin, author’s note) were found at three Italian coastal towns located on the Gulf of Venice, an arm of the Adriatic Sea. In view of the above, it is reasonable to conclude that the plane plunged into the Gulf of Venice and that all on board perished. There, the records of the Department of the Army are being amended to show that Sergeant Acampora was killed in action on 28 February 1945, in the Gulf of Venice.”

On December 1, 1950, a fishing troller found the remains of Sergeant Acampora 20 miles off the coast of Venice, still enveloped in his parachute. He was then buried at Pellestrina, Italy, and, after being identified, was returned to the St. Lawrence Cemetery in New Haven for final burial. The remains of Hanson; Dragoo; Horwitz; Brady; Nally; and McGraw, were never located.

In the intervening years, the wreckage of Lieutenant Hanson’s B-24 has been found, just off the coast of Grado, Italy, in 30 meters of water. The wreckage was first discovered in the 1970s and has been studied extensively by Italian historian and Freddy Furlan. The Hanson crew’s plane was positively identified in 2013. A propeller from the plane was salvaged and set up as a memorial to the crew in Lignano Sabbiadoro, Italy to airmen who died during World War II.

Solid evidence shows that human remains of the crew may be found in the wreckage (see accompanying photos). Various souvenir hunters have been seen at this underwater crash site, taking away parts of the bomber, and who knows what else. Like the final resting place of its brother B-24 from the 449th Bomb Group, “Dumbo,” the crash site has yet to be forensically investigated by the appropriate military personnel, despite ongoing efforts from many of the families.

Please sign this petition to bring them home: http://chn.ge/1FuUsPE

Update: A recovery expedition of B-24 42-51642 (the Hanson crew) is planned for late summer, 2015. You can follow progress on a Facebook page dedicated to the Hanson crew. The wreckage of the Kendall crew’s plane is about 10 – 15 miles away, buried in mud.

Here’s a link to video of a diving expedition by Freddy Furlan and his team in Sept. 2014, courtesy of historian Freddy Furlan of Italy and James Fox, nephew of SSGT Thomas McGraw. https://www.youtube.com/watch?v=0gsZUiwaz3c