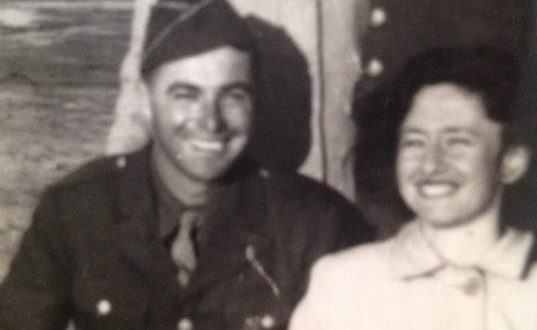 Max Poster’s personal effects were like those of most of his fellow infantrymen of the 86th Mountain Infantry Regiment. At the time of his death, his possessions included a tobacco pouch; a plastic box, contents not specified; two books, and one lot of miscellaneous papers. Not much to mention or remember.

But they also included an ocarina.

An ocarina is a wind instrument of ancient origin, perhaps first used 12,000 years ago in China and Mesoamerica. Typically, it is in the shape of a box or an oval, with some number of finger holes, and a mouth piece. It is played like a flute.

The Army issued thousands of ocarinas to troops and included a 14-page booklet produced by the manufacturer entitled, Music is Fun with this Gretsch Ocarina Book. Simple instructions for well-known songs such as “Row Your Boat” and “The Farmer in the Dell” were shown in the book, and each reader was advised that “Anyone! Everyone can play ocarina with the Army Method!”

He joined the Army on October 8, 1943. Eighteen months later, Max was killed in action near Cereglio, Italy, on April 15, 1945, less than three weeks before the war in Italy ended. The music he played on his ocarina was stilled forever.

His remains were recovered and identified by his dog tag and a handkerchief with the numbers “P-3121”, the numbers being the last four digits of his Army Serial Number.

He was buried at the U.S. Military Cemetery near Granagilone, Italy, four days later, on April 19, 1945 at 3:30 in the afternoon. On his right were the remains of Private Joe H. Matzeder, of Leavenworth, Kansas, and the 701st Tank Destroyer Battalion; on his left was Private Lee R. Norris, of Newberry County, South Carolina, and, like Max, a soldier of the 86th Mountain Infantry Regiment. Private Norris was killed on April 16th; Private Matzeder the next day.

In January of 1949, the body of Private First Class Poster as disinterred, and placed about the USAT Eric Gibson at Leghorn, Italy, and was received at the Port of New York on February 15th. It was then sent via the Southern Pacific Rail Road to his home in Los Angeles, where it arrived on March 9th.

Shortly after his burial, his wife, Sophia, requested a government-furnished headstone for his final resting place at Beth Olam Cemetery in Hollywood. There was nothing unusual about this request, having been made before by thousands. However, after she submitted the necessary forms and paperwork, she was told by the Army that her husband’s surname was “Posternak,” not Poster. By Army regulations, this meant that “Posternak” would be the name used on his headstone.

Sophia, who of course knew of her husband’s original last name, did not accept the decision made by the Army. She wrote them first in April of 1949, stating that when he became a United States citizen, he officially changed his name to “Poster.” She also stated that, as his wife, she used the last name Poster, which was also the name used by their daughter. Max’s parents, David and Lena, also used the surname “Poster.” However, the Army denied her request, pending the submittal of more convincing evidence.

As she had written in a letter, “This matter is of extreme importance to me”, so she took another approach. She had various relatives and friends write letters, attesting that her husband’s name was in fact “Poster.”

One of Max’s military friends, a Fred Odenheimer’, wrote that:

Another fellow soldier, W. Richard Schutt, wrote “Max Poster and I were attached to the same company during (his time in Italy). Our companionship continued until April 15th, 1945, at which time he lost his life through enemy action on the Italian Front.”

“It is the wish of his family that his marker be under the name of Poster, as that is the way he was best known.”

In all, seven affidavits were submitted to the Army, and the Army finally conceded. An internal memo dated in November simply stated, “Evidence sufficient . . . name will (be) shown as Max Poster.”

Somewhere, sometime, if you hear the soft notes of an ocarina, perhaps playing “Swanee River” or “Oh Susana,” take a moment and think of Max Poster, and wonder what the last song he ever played was.

My thanks to Max’s niece Vanessa for sharing the family photos in this article. It’s been a great pleasure researching your uncle. –Best, Bill

Categories: Client Stories WW2 Blog WWII
Previous
Calling all selfies! #NoOneLeftBehind
Next
A successful mission, but for the loss of a father