“How am I to know?” is the ironic caption on William Hummer’s yearbook photo from Dover High School, class of 1941. 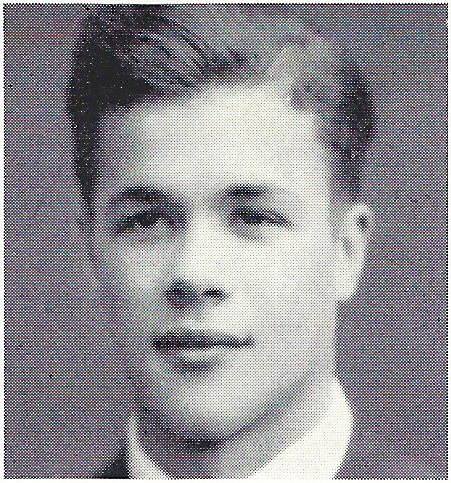 William “Bill” Minton Hummer was killed in Operation Varsity in WWII at the age of 22. He was a stand-in for a regular crew member on an extremely dangerous mission, dropping supplies at tree-level to troops in heavy fighting in Germany just before the end of the war. According to the 44th Bomb Group historian, due to the risk of friendly-fire accidents, the B-24s on this mission were unarmed and forbidden to shoot, even under fire. B-24 Liberator “Kay Bar” was brought down by small arms fire on the ground, reportedly while one of the young American crewmen was standing in the open door of the plane.

This incident has been painstakingly researched by myself and by my friend and client, the late Peter Loncke of Belgium, who located the crash site near Wesel, Germany.

Much more was discovered, including information learned by Peter about a 15-year-old German boy who was pressed into service by the Nazis and forced to be on the gun crew that shot down Kay Bar and another B-24, the Southern Comfort, which crashed a very short distance away. The young man was so appalled and terrified at having winessed the downing of the two planes that he fled his unit and hid out on a farm for the rest of the war. Peter Loncke had the opportunity to meet this courageous man.

In June 2014, Hummer’s hometown newspaper, the Daily Record, ran a story about the Kay Bar crew and asked the Mine Hill community for help in locating any surviving family members of William Hummer. DeWitt R. Hummer, who served in the Army in WWII and survived the war, has been identified as Williams older brother, which was a starting point in our search. The article resulted in the first photos of William Hummer that the research community had seen, contributed by the Dover Historical Society.

Although many readers wrote in to assist, the search continued for many months for surviving family of William “Bill” Hummer. Wanting to share William’s story with his surviving family members, many people devoted countless hours in the search.

Finally, in September, we made contact with first a daughter and then a son of DeWitt Hummer. The son, named after his father’s beloved brother, is William Minton Hummer II.

While the search continues for the eldest child of DeWitt Hummer, Morris County is set to honor 2nd Lt. William M. Hummer with its Distinguished Military Service Medal on November 12, 2014. Mine Hill Mayor Sam Morris will accept the medal on behalf of the Hummer family.

I’m thrilled that this young man is being honored in this way. I wouldn’t miss it for the world.

Special thanks to the 44th Bomb Group Historian Roger Fenton, and to the Dover Historical Society, Mine Hill Mayor Sam Morris, Jan Williams, Stanley Schoonmaker, Charles Jurgensen, and the tireless and devoted Roger Flartey for your exemplary efforts in honoring one young veteran who sacrificed a life he loved for each of us.