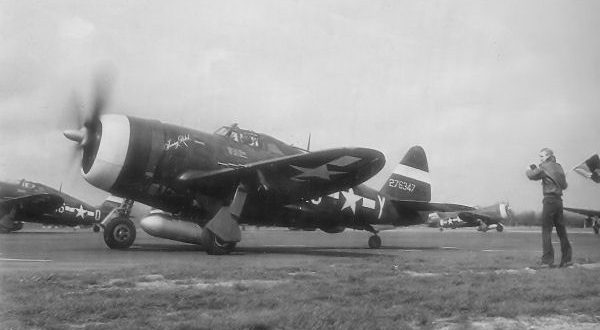 “A Steady Stream of Gray Smoke”

The visibility was poor – 800 to 1000 feet – with localized rain squalls. The P-47 ‘Thunderbolts of the 366th Fighter/Bomber Group were going after German troop concentrations in the area of Bayeux, France, on D-Day, June 6, 1944.

1st LT Peter W. White was the last Allied flyer to see LT Krause. He provided the following testimony of what proved to be LT Krause’s last mission.

“I glanced back when leaving the target and saw that the number five ship, flown by 1st Lt. Arthur Krause, had been hit. I watched him as he drew away from the target. He was trailing a steady stream of gray smoke. He climbed slowly to about 800 feet and then began gliding down. I called to him over the R/T but received no acknowledgement. He continued to glide, crashed and exploded at the edge of a wood approximately 645732 (1:50,000 6F/2). Lt. Krause did not bail out or leave the plane before it exploded.”

The remains of Lieutenant Krause were identified after the war; at the direction of his next of kin, he was buried in the Normandy-American Cemetery at Colleville-sur-Mer.